In 1912, Ernest Jackson, Grant’s grandfather, moved his wife and seven children to Tinchebray District in the County of Paintearth from Nebraska, USA. In 1946, Stanley Jackson, Grant’s father, purchased the farm located on the SW quarter of 02-41-14 W4. After the move, Stanley relocated a barn from three miles north to this quarter for their dairy. When the family no longer had milk cows, the barn was used for calves from the Jackson’s cattle herd. In the years following, the Jackson’s used the barn less and less and the barn deteriorated. In the 1990s, when the wood and cement supporting the barn became too weak to warrant restoration, Grant and his son, Scott, set out to find another barn that they could restore and use. In 1996, they moved a barn that used to belong to Ambie Mallet from Forestburg to their home quarter. Ambie Mallett had come west from PEI in 1904 and homesteaded, along with his brother Bert, in the Hastings Coulee District in 1906.  In 1916, he bought a farm two miles south of Forestburg, where he built a house and barn. Grant Jackson discovered that the barn cost Ambie Mallet about $1,181.25 to build back in 1916.

In 1944, Ambie decided to retire from farming and sold the farm to Albert and Tillie Bailer.  In 1967, Albert and Tillie retired to Forestburg, and their son Gordon and his wife Irene took over the farm. In April 1990, Gordon and Irene sold the farmyard to Terry and Ken King. Of the land they then farmed, three quarter sections were sold: two to Joe and Larry Prehn and one to Ron Link. A few years later, the iconic red barn was moved to the Grant Jackson farm near Galahad.

Grant Jackson does not know who built the Mallet’s barn but he knows it was built in 1916. The Jackson’s restored the Mallet’s barn and refitted it for use as an alpaca barn. The family stopped alpaca farming in 2002 and now use the barn for storage and other restoration projects.

The long term goal for the barn now is to turn it into a museum. Grant hopes that the “Old Barn Hay Tool and Equipment Museum” will become a reality and delight both the old and the young alike.

After Grant and his son, Scott, had taken an interest in restoring barns, they set out to find a new barn for their property. This photo is of the Jackson’s old barn while they were tearing it down. The old barn was very small and the wood had rotted out.

This is a photo of the foundation the Jackson’s had poured for their new barn to sit on. 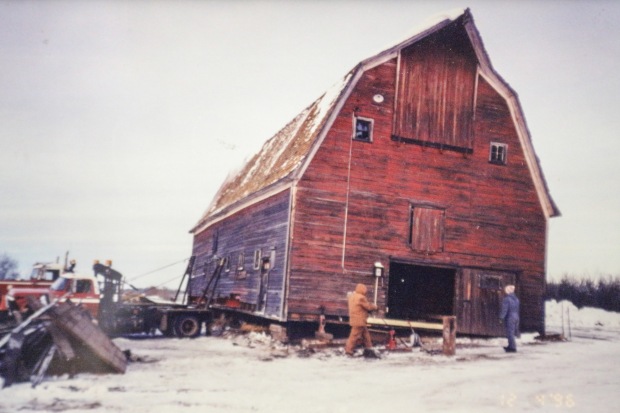 The Jackson’s found a barn south of Forestburg and bought it.

Some power lines needed to be moved in order to get the barn down the road.

The first thing Grant Jackson did when the barn was finally set and stable in his yard was rebuilt the cupolas. Later in the year, they would be installed and this photo was taken. 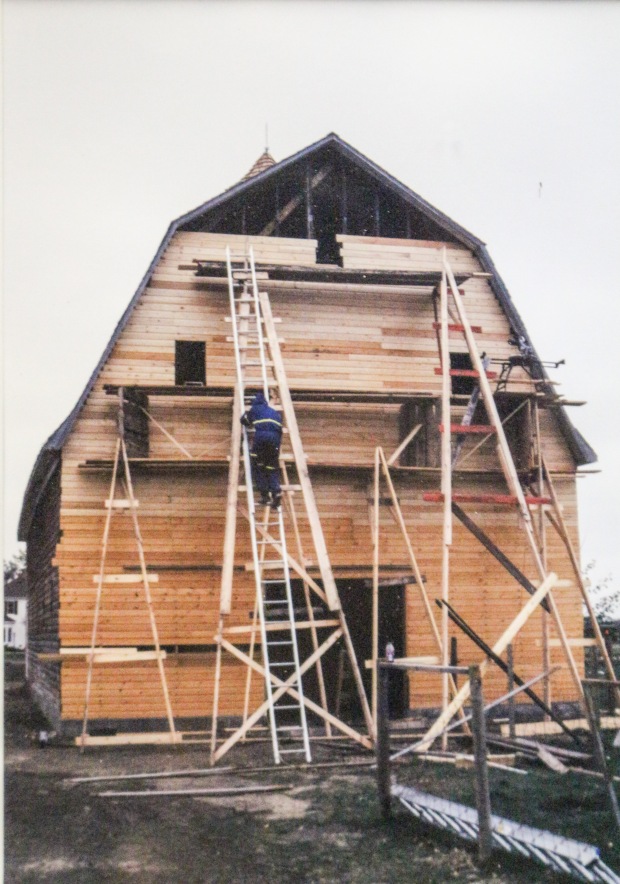 The north side of the barn was very worn from the weather. As such, the Jacksons resided the north face of the barn. Grant could not find any fir siding to match the original siding. Instead they special ordered this drop siding and installed it in 1996.

The siding was painted red and new double pane windows were installed. A few years after 1996 a wind storm went through and blew the cupolas off the roof. Grant Jackson repaired them once again and reinstalled them.

The barn on the right side of the photo is the original barn that rotted and was torn down.

This photo is of the Jackson farm in the early 2010s. The barn in this photo is the Mallet’s old barn which was moved and relaid in 1996.

This frame shows the east and south faces of the barn. The two cupolas on the roof of the barn were restored by Grant Jackson.

This frame shows the east side and north face of the barn. The windows on this barn are not the originals. The old ones were replaced with double pane rectangular windows. 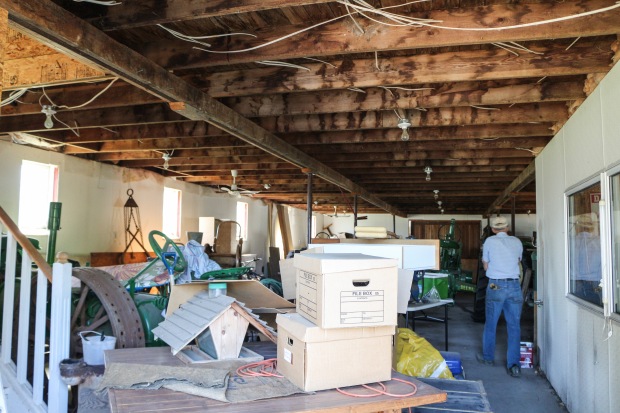 This frame shows the view looking south from the north door of the barn. The interior of the barn was completely renovated. All of the stalls were removed and some siding was put up to protect the walls. This was done because the barn was used for alpacas in the late 1990s and early 2000s.

The following pictures are of pieces of equipment that Grant Jackson plans on using for display in his future museum. Right now he and Scott are working on restoring them as a hobby. 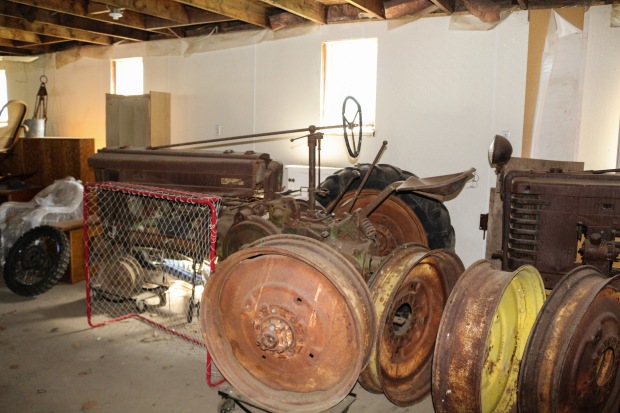 This tractor is a three-wheel tractor. Grant says Scott got it in California.

This frame shows a wooden pipe and pump for a water well.

This frame shows one of the many different types of hay hooks Grant has acquired.

This frame was taken standing at the north end of the barn and it is of the south face of the barn. This barn has a hay track in the rafters and is one of a few barns that has the original rope for the hay track.

This frame shows the standing platform on the south face of the barn. This would allow the owner to fix and operate the hay carrier. 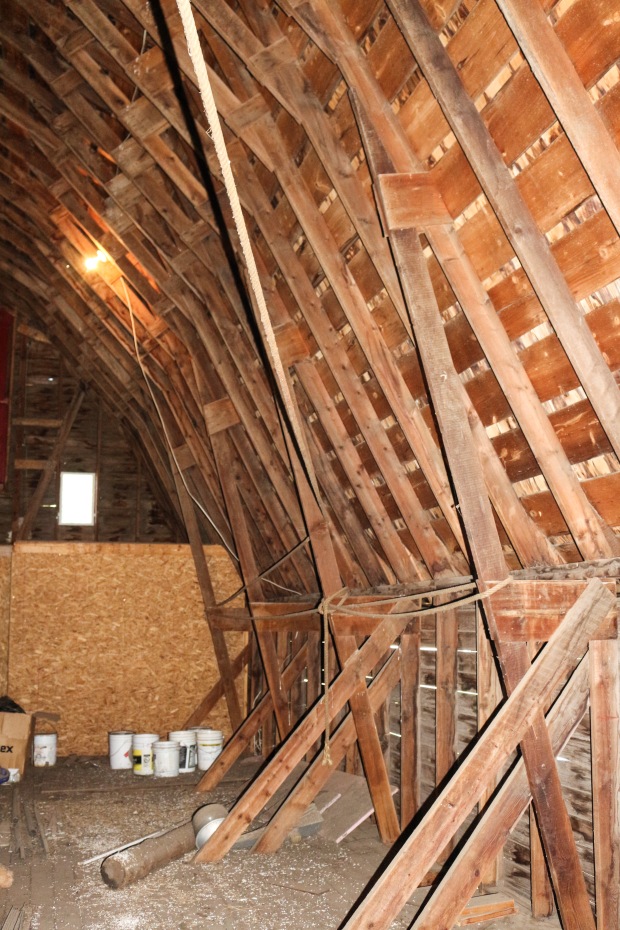 This frame is of the east side of the roof. It shows more of the original rope for the hay track and some of the roof framing. Sets of trusses and supports create a gambrel shape and have allowed the roof to stay strong and steady through the years.

The siding on this barn is wooden shiplap.

Grant Jackson is an avid collector and restorer of hay carriers, antique tools, and farm equipment. Pictured here are just three of the hay carriers that he has personally acquired and restored. 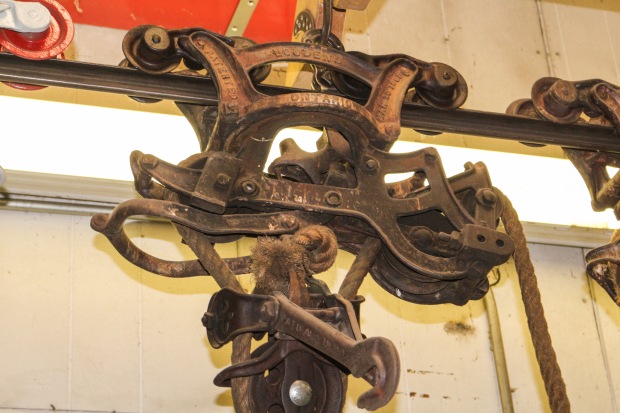 The hay carriers that Grant Jackson buys look like this upon purchase. He sandblasts them to clean them and then hand-paints them. 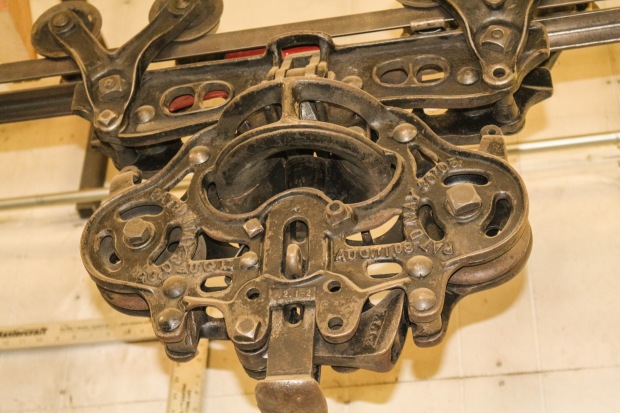 This frame shows the barn carrier from Grant Jackson’s barn. Many different markings are welded onto it. One of the most interesting phrases is the date specifying the age of the piece: Aug. 11, (19)08.

The day that I visited the Jackson farm was a momentous day. It was the day that Grant Jackson was installing his windmill, a three-year project.

Grant will set the windmill so that it pumps water out of the nearby pond. This will mean that visitors will be able to see how an old-fashioned windmill used to work.

The fans on Grant’s windmill are wooden and he got them from a dealer out of Texas, USA.

Decorations: No names or dates decorate it, white trim

One thought on “Jackson” 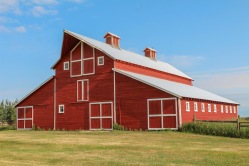 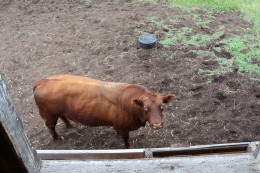 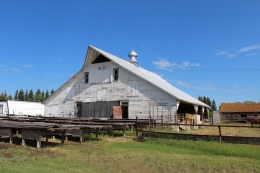 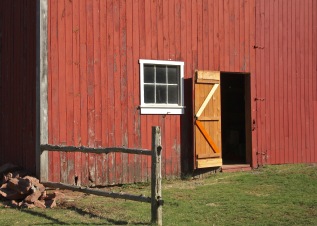