There is a hill in Township 041, Range 11, W4 which has in the past been home to various First Nations peoples, a bypass on the route of many frontier expeditions, a marker for the surveying of Canada, the home of prairie settlers, and a window to the past for many historians. This hill is referred to as “Treaty Hill” or “Flagstaff Hill”.

On Tuesday, July 6th, 1858, the Palliser Expedition decided to cross the Battle River in order to avoid a more tedious trek across the land on the South side of the river, as per their guide’s recommendation. The Palliser party followed their guide’s advice and set a course for the river valley. At this time, they were North of the Neutral Hills, East of the Battle River, and South of Hardisty, Alberta. At 6 pm on July 7th, the Expedition “arrived at the site of a great medicine lodge of the Blackfeet (likely the Kaiani, or Blood,), where [they] could see the Battle River at a distance of only two miles.” (1). There was a “great ceremony at these lodges.” (1). Later that evening the Expedition would cross the Battle River at a crossing seeming to be 4 or 5 miles south-southwest of Hardisty, where the river’s course changes from north-northwest to north-northeast. The group would camp for the night on the West side of the river near a lake and then wake the next morning to continue travel westward.

On Thursday, July 8th, 1858, the Palliser expedition ascended a “steep and sheltered bank of the (Battle) river, above a valley of the richest vegetation” and “returned westward at a distance of 10 miles from the river, and reached the base of a very conspicuous landmark, called by the Crees Hisliwaornis Kahkohtake, or the flag-hanging hill.” (1). This hill is what locals today call “Treaty Hill” or “Flagstaff Hill”.

Palliser noted that “the Flag-hanging Hill commands an extensive view of the undulating country, with patches of poplar and small lakes. The Surcee tribe of Indians use it as a place of assembly, and it is very rarely deserted by that people. Although we did not meet any Surcees in passing the hill, we were assured that they were somewhere in the neighbourhood, as found a dead buffalo cow, yet quite warm, with an arrow through the heart. The Sucrees have been for many years allies of the Blackfeet, but were originally of the stock of the Beaver Indians, a tribe inhabiting that portion of land which lies immediately t the north of Lesser Slave Lake. Although they frequently tent among the Blackfeet, yet the latter tribe do not speak their guttural language, while every Surcee speaks fluently the Blackfoot tongue, in spite of its great dissimilarity to their own.” (1). The Sarcee language belongs to the Athabaskan language family, which also includes Navajo and Chiricahua of the South and Dene Suline (Chipewyan) and of the North.

The Surcee nation now resides adjacent to the southwestern city limits of Calgary, Alberta. The word “Sarcee” is believed to have come from a Siksika or Blackfoot, word meaning boldness and hardiness. The Sarcee people present-day call themselves Tsuut’ina or Tsuu T’ina, which translates to “many people” or “every one (in the Nation)”. The Tsuut’ina people signed Treaty 7 in 1877 and not Treaty 6 and so their emigration from the Treaty Hill area must have occurred in the 15-20 years between Palliser’s Expedition and the signing of Treaty 6 in the Flagstaff Region.

The 1872 book chronicling William Francis Butler’s trek from Fort Garry to Rocky Mountain House and back mentions the hill. The map in Butler’s book The Great Lone Land refers to the hill as “Flag Hill” (3). After participating in the events of 1870 at Red River, Butler was sent on a special mission across the prairies to report on the smallpox epidemic.

Bishop John McDougall’s book mentions “Flag Hill” during 1870 in his book In the Days of the Red River Rebellion (4).

The name “Flagstaff Hill” appears on J.B. Tyrell’s 1887 Geological Map of Part of Northern Alberta and Portions of the Districts of Assiniboia and Saskatchewan, North West Territory (5). The map also sets the height of the hill as greater than 2500 feet, or 752 meters, above sea level.

It is said that by 1887 the hill would have had a second name, “Treaty Hill”. This name came to be used following an event that took place on the hill on July 3rd, 1872. It is believed that Bishop Vital Grandin helped bring about a peace between the Crees and the Sacrees, Blackfoot, and Blood (6). John Kerr mentions, “a recent truce between the Blackfeet and the Crees.” in his 1872 account of a Blackfoot-Cree wedding (7). This name became so strong in the area that when a school district was organized in the vicinity it was called “Treaty Hill No. 4056” (8). Additionally, a “Flagstaff No. 3505” school district had earlier been organized further to the West of the hill.

The letter from Bishop Vital Grandin (6) that was proposed to mention this treaty tell a slightly different tale. It goes, “Le 9 juin était le deuxieme dimanche que nous passions en voyage; nous etions campes a une place que les sauvages appellent la butte du Pavillion.”/”June 9th was the second Sunday that we spent on a trip; we were encamped at a place which the savages call the Flagstaff.”

“Je m’informe de l’origine de ce nom et on me dit qu’autrefois un gran chef Pied-Noir était mort sur cette butte et y avait eté enterreé. que ses compatriotes. aprés avoir immolé une vingtaine de chevaux sur sa tombe, avant de s’en éloigner avaient elevé une espéce de monument surmounté d’un pavillon que l’on a vu longtemps et que l’on voyait de loin. De tout cela auhoird’hui il ne reste plus que le souvenir et le nom de la dite place.”/”I inquired as to the origin of this name, and I am told that formerly a great Pied-Noir chief had died on this hillock and had been buried there. than his compatriots. after having sacrificed some twenty horses on his tomb, before departing from it, had raised a species of monument surmounted by a pavilion, which had been seen for a long time, and which could be seen from afar. Of all this today, there remains only the memory and the name of the said place.”

A past resident of the area, Eleda Cameron Lowther (born January 14th, 1912), remembers when being quite young when a flagpole still stood on top of the hill. Eleda is the mother of one of the current owners of the Treaty Hill land; Fay Davidson.

The Geodetric Survey in Canada used Flagstaff hill as a reference point. As such, the hill has three cement cairns on the top of it. Please see below for pictures of these.

These cairns are not the only structures on this property. Treaty Hill/Flagstaff Hill is home to these Geodetic Survey markers, outbuildings and a barn, and a homestead home.

This frame shows the peak of the hill. This frame was taken whilst standing on the West-Southwest side of the hill looking East-Northeast

This frame shows one of the three markers used by the Geodetic Survey. This frame was taken whilst looking North-East

This same marker is one of the easiest markers to find as it is in an area sparse of trees. This frame was taken whilst looking North. 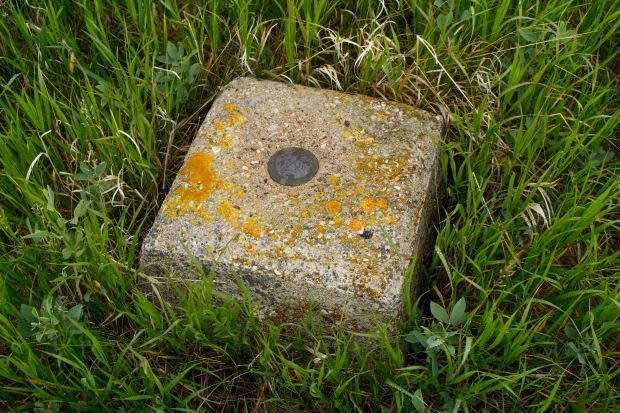 This frame shows a close-up of the cement that makes up the marker.

This frame shows a close-up of the metal marker set into the concrete.

This frame is a close-up of another concrete marker on the hill. This marker lies to the North-West of the first marker shown.

This frame shows a close up of the metal marker set into the concrete.

This frame shows one of the more concealed markers. This marker is positioned South-West of the first marker.

This frame shows the third marker.

This frame shows a close-up of the third marker’s concrete.

This frame shows the metal marker set into the concrete on the third geodetic survey point.

Panoramas Taken From the Top of the Hill 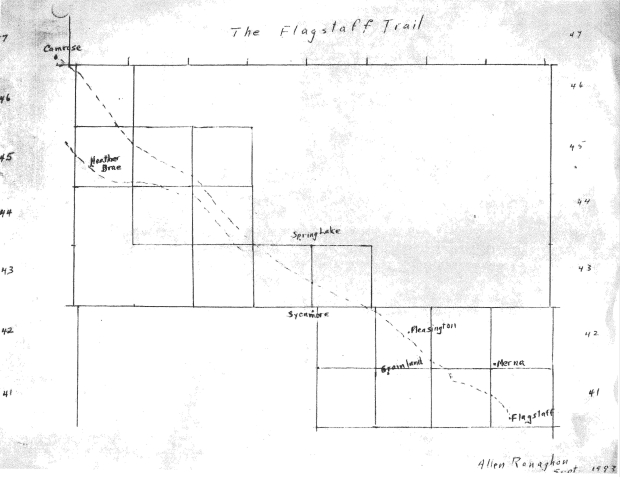 Letter From Allen Ronaghan to Glen Miller About Treaty Hill Papers of the Palliser Expedition

“A Dictionary of Cree Language”

Map from “The Great Lone Land”

“In the Days of the Red River Rebellion”

“Geological Map of Part of Northern Alberta and Portions of the Districts of Assiniboia and Saskatchewan, North West Territory” 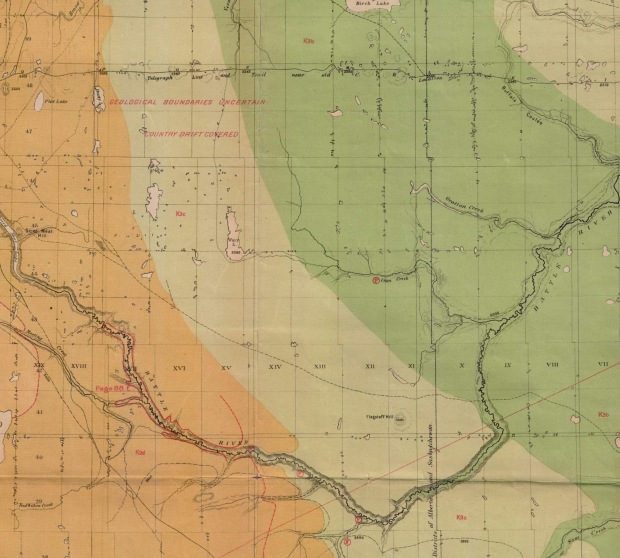 French Passage With English Translation Beside 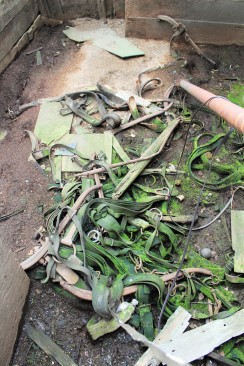 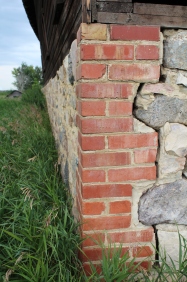 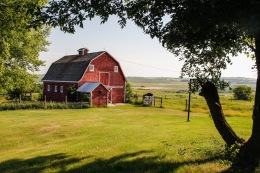